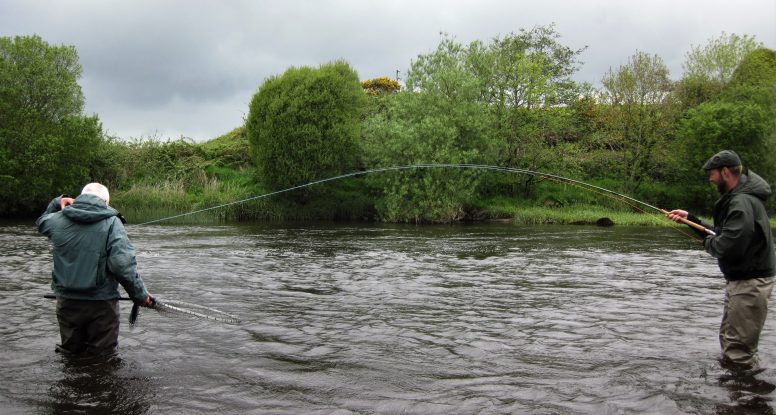 Hooking Salmon On The Fly (part 2)

In part one we looked at a hooking system that works very well, and can be used with confidence for the majority of our fishing.  This involves ensuring that we keep our rod tip well up(about 45 degrees) as our fly fishes around in the stream, and when we get a take the rod is lowered in gradual increments as the fish tugs on the line.  When these tugs increase in strength to become positive strong pulls, and we begin to really feel the weight of the fish we stop lowering the rod, clamp the line for a couple of seconds while smoothly raising the rod back up to make sure the hook is fully set.  This taking process can be over very quickly with the fish almost pulling the rod out of our hands immediately, but because we had been fishing with our rod tip well up we had a nice drooping curve of fly line from the rod tip to the water, and this buffer allowed the fish to turn with the fly.  It is the versatility to cope with, and accommodate a wide variety of salmon taking behavior that makes this hooking system so dependable. 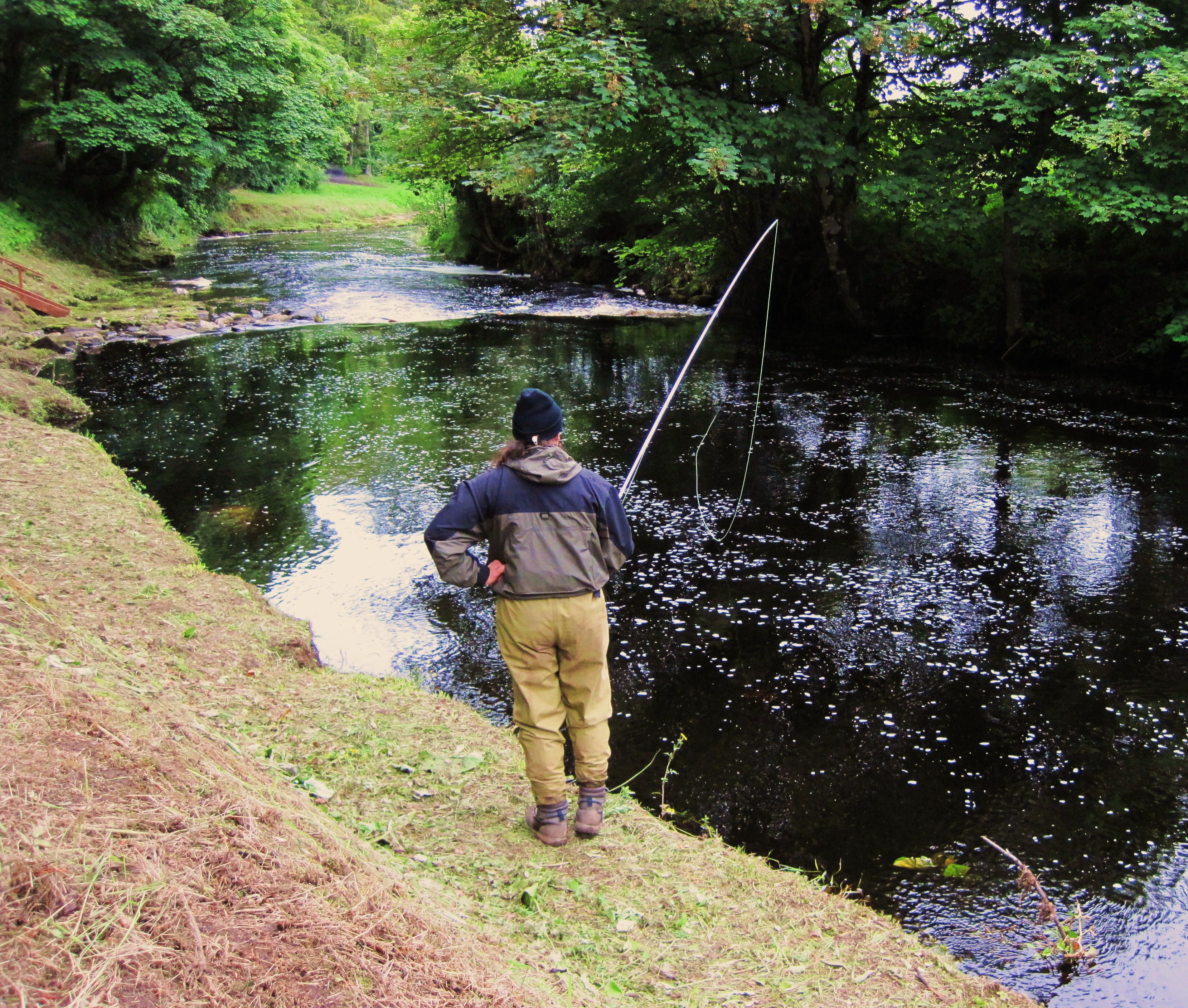 the Rock Pool on the river Easkey 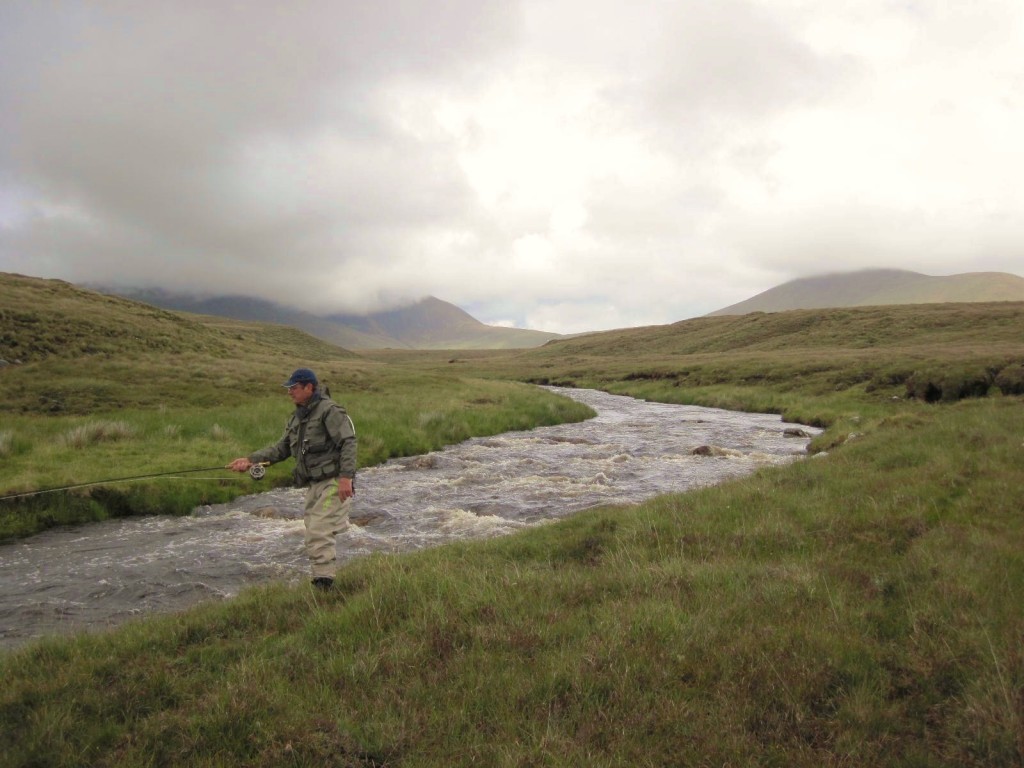 There are certain conditions where we may have to modify our approach and hooking technique, and one might be during spells of windy weather when our high held rod tip may be a disadvantage as it allows our fly line to be flapped all over the place, with our selected presentation being adversely affected.  In this situation we need to keep our rod low and fish off the reel.  There are many experienced, successful anglers who use this technique of fishing off the reel, which also works very well when fishing in fast water pools.  The taking salmon is allowed to pull line freely from the reel during the taking process, and when the fish stops taking line off the reel, the rod is then smoothly raised up to feel for the strong pulls and weight of the fish and set the hook.  Obviously the drag setting on the reel is set relatively lightly, but we must be careful that the drag setting is not set too lightly or we may risk an overrun on our fly reel, with our fly line ending up in a bird’s nest of tangled loops, and everything jamming up.  A good way to guard against this problem lies in the initial adjustment of reel drag before we commence fishing, and all we have to do is grip the line near the reel and give it a sudden jerk, if the reel overruns then adjust the drag setting until the reel gives line without overrunning.  There is a subtle margin of error between having the reel drag set too strongly with the salmon feeling excessive resistance during the take, and a fly reel drag that is set too lightly with the possibility of an overrun, and a jammed reel 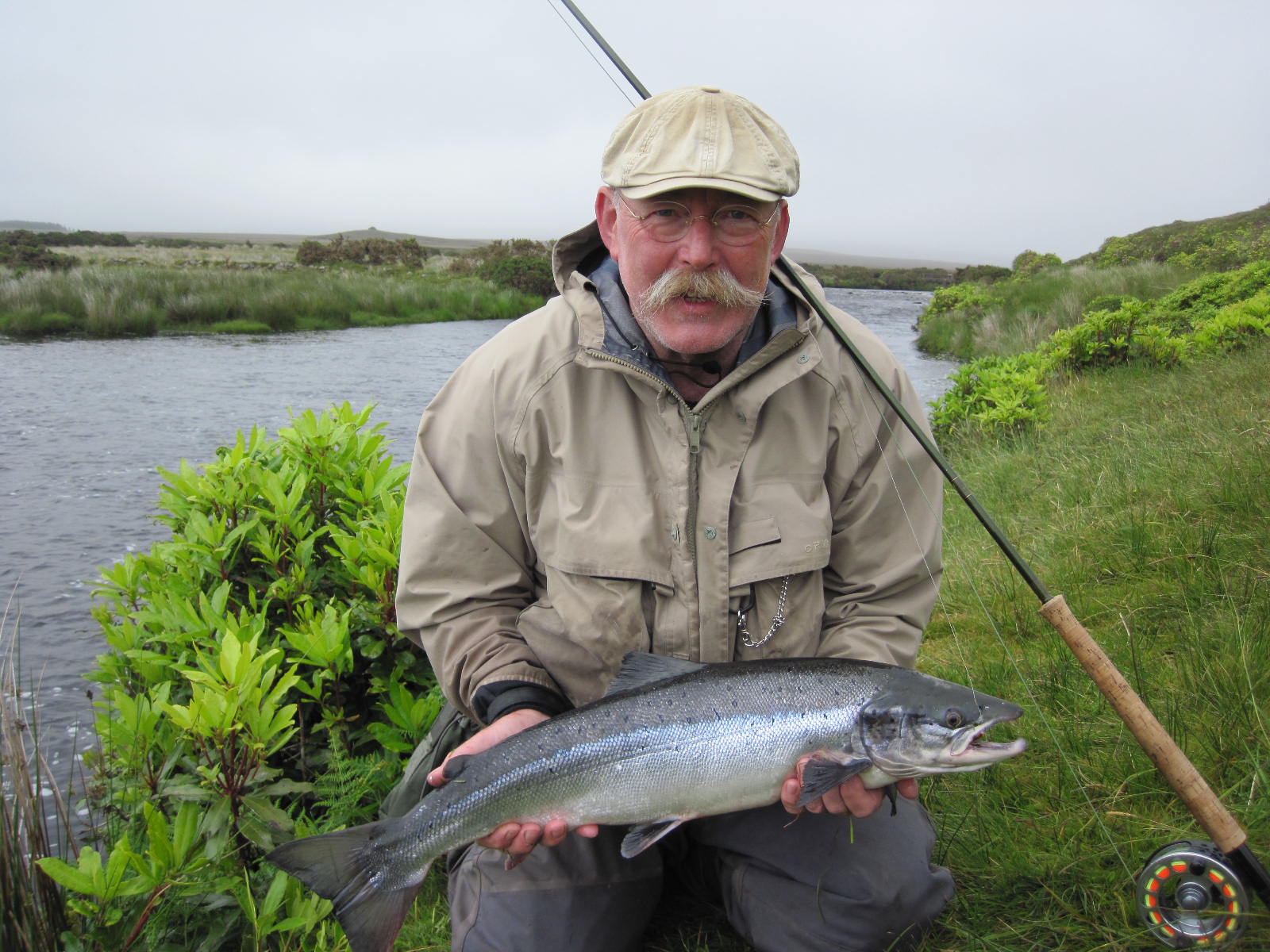 Fresh grilse are notoriously soft in the mouth and many are lost during the taking process, or during the subsequent battle. The problem of lost fish may not always be to do with the angler’s technique, but might actually be the choice of hook that the fly is tied on.  Treble hooks in the mouths of fresh grilse sometimes allow one prong of the treble to lever against another, with the hook rolling around the mouth, and eventually working free. If fresh fish are been lost on standard sized trebles (6s,8s,10s) then it may be wise to change to double hooks which are excellent for hooking, and staying well set in during playing fish.  Smaller size 14,16,18 trebles are also excelent hookers of Salmon.

Another area of tackle and technique that sometimes gets overlooked is actually the line weight, plus the action of the fly rods we use when targeting these soft mouthed fresh fish.  Sometimes when we set the hook in these fresh fish the hook hold we achieve is barely holding in, and if we are not careful during play then it is very easy for the hook to pull out, especially if we are using stiff rods and heavy fly lines.  We should try to use as light a fly line as will get the job done effectively, and use nice progressive action rods as opposed to ultra fast action rods.  With a lightly hooked fresh grilse we stand a much better chance of landing the fish on a progressive action seven weight than a stiff action nine weight rod, as the lighter outfit is much more forgiving, and absorbs the salmon’s lunges more smoothly and softly. 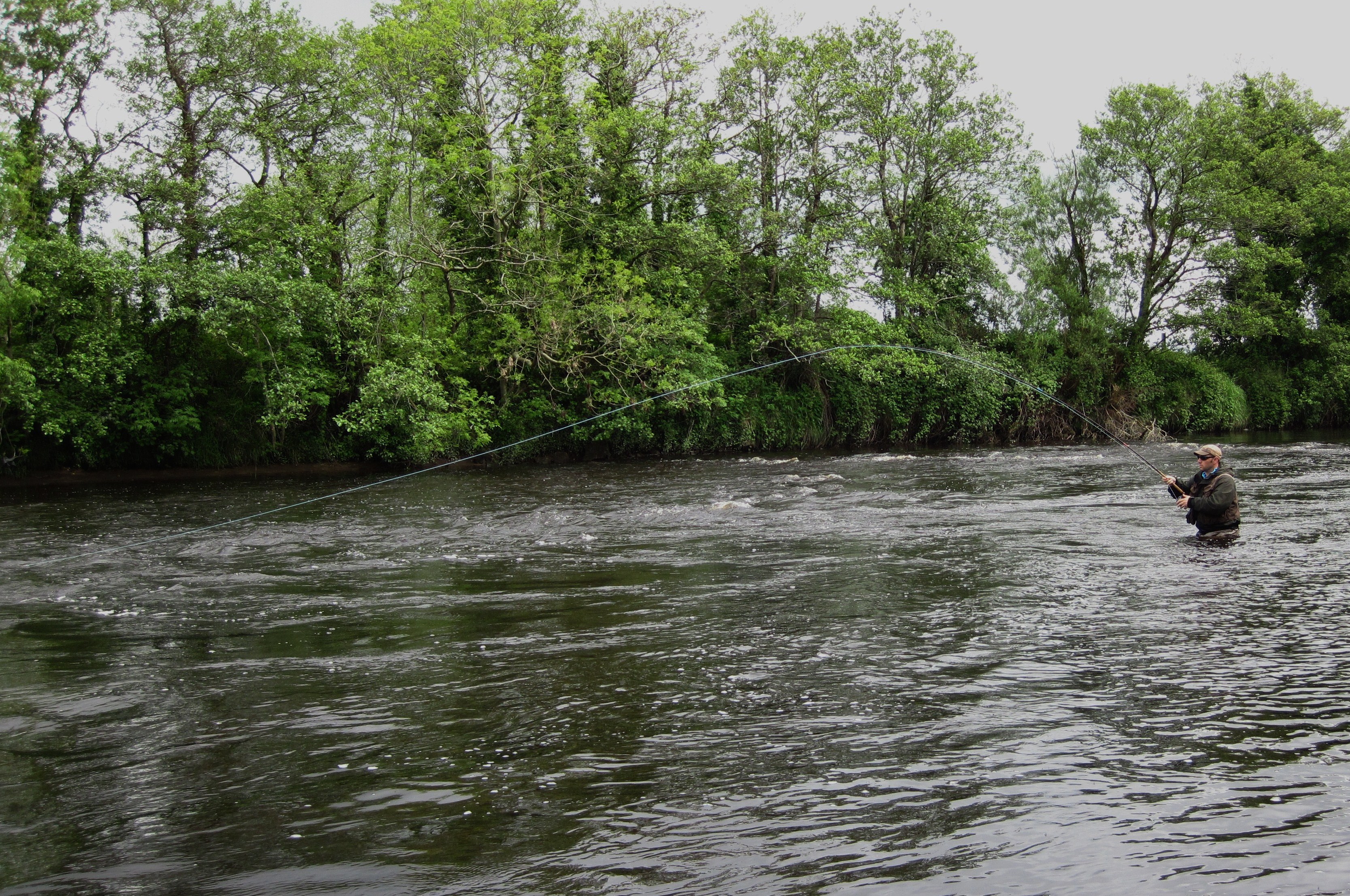 Jurgen Van Den Hout clamps the line tight for a few seconds to make sure the hook is set after he had already allowed this salmon enough time to properly take and turn away with the fly.

When a salmon takes a fly into its mouth it will feel resistance from the rod and line but that is ok as salmon are used to capturing prey that resist.  The salmon rapidly opens and closes its mouth trying to crush and kill its prey, with the occasional fish actually swallowing the fly.  Successfully hooking, and landing salmon on the fly has many important factors, but the most important one is giving the fish time to go through its natural prey killing behaviour, whether that takes two seconds or ten seconds