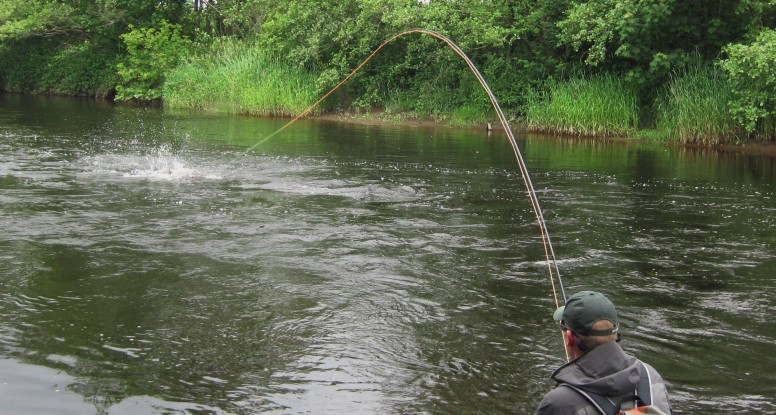 The comfort factor of smooth evenly flowing currents to a salmon is best described with this analogy-lets imagine we are out for a leisurely walk and there is steady, evenly blowing wind in our face.  The only adjustment we might have to make is to maybe lean slightly into the wind as we walk.  Now imagine we have to walk in a strong swirling wind that is buffeting us from all directions and the road is littered with unavoidable deep potholes.  Which of these scenarios would you chose if you wanted to return home aching, and tired?

One of the most frequently asked questions in salmon angling is- what is a salmon lie?, and this is usually followed up by other questions such as-why do salmon rest here?, and how do I go about spotting possible lies for myself.  These are just some of the questions we must answer if we are going to become consistently successful salmon fly anglers.  Beginners especially find this aspect of salmon fishing technique very daunting, so over these next articles we will have a look at some of the variables that we may have to contend with.

The first problem in assessing where salmon lie, may arise for anglers coming to salmon fishing from other branches of angling in that salmon don’t feed in freshwater and have different requirements to other fish as regards to where they lie.  Brown trout, roach, and pike will sometimes lie in places where they have to use extra energy, but only if the food obtained from being there compensates them handsomely.  Salmon carry their food reserves with them in their bodily tissues, and their main concern is to conserve this energy, as it must sustain them during their stay in freshwater.

The main requirements of a salmon lie from the fish’s perspective are safety, a smooth evenly flowing current to help conserve energy, and a flow rate that provides the required amount of oxygen The safety part of this is an inbuilt genetic wariness about camouflage, blending into the environment, and although there are few birds of prey capable of taking salmon flying around nowadays, historically it was of major concern for all fish.  The ability to observe and pick out sections of smooth evenly flowing water on a salmon river,even among areas of seemingly wild rapid water is an important skill for the salmon angler to cultivate.  Salmon do not like to lie in turbulent, swirling water. Salmon will adjust their position in different current flow rates to access the level of oxygen that ideally meets their requirements at any given time and this can vary depending on the time of year, water temperature, or air temperature.  An example of this happens during times of low water levels and high air/water temperatures, when salmon get distressed because they are being forced to expend extra energy to lie in faster water to obtain the oxygen they need. 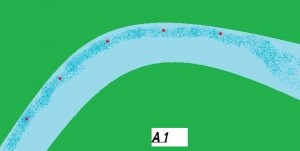 This simple diagram shows a sweeping bend on a salmon river. The water level is at summer low and whatever current remains is along the outside bend of the river.  The red dots are possible salmon lies and they are in the main flow.  Salmon will not be lying anywhere else in this pool but the main flow at this very low water level and it is a waste of valuable fishing time if one does not concentrate their efforts there.

This diagram is a cross section of the same pool depicted in diagram A1.  You will see that the deepest part of the pool is on the left and is the outside bend of the river. The two salmon depicted are lying right in the main current.  You will see that the river bed shallows up to the right (inside river bend) but there will be no salmon resting here in these reduced flows as it is to shallow (safety)and there is not enough current flow to provide sufficient oxygen for the fish. 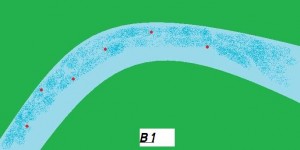 Now the river level is at a medium height and as you can see the main current, depicted in darker blue, has expanded over a wider area of the river.  There are still some potential salmon lies shown along the outside bend but the higher water level has also now made available some new lies towards centre river.  If the current gets too strong at some points along the deeper outside bend then the salmon will move into the easier current towards the middle of the river.

This cross section of diagram B1 shows the potential salmon lies expanding towards the middle of the river, while still retaining some lies along the deep outside bend. 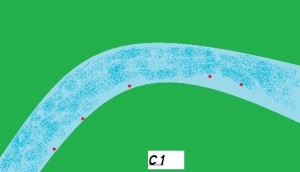 The water level is now high and the current is too strong for any salmon to lie along the outside bend or even at centre of the river.   Salmon will now take up residence close to the inside bend.  They will be lying in an area that may well have been high and dry when the water level was low.  This scenario causes many problems for salmon fly anglers as they may be using sinking fly lines to combat the strong current and when their fly approaches the shallower water near the inside bend it continually gets snagged on the river bed.  A better option is to use a floating fly line, as these fish are lying in only a few feet of water, and we can cover this well defined taking strip with much better control.  Sometimes salmon can actually be lying right in among the grass along the river bank, so if possible it is better not to wade, and keep bank side vibrations to a minimum.  Occasionally you will hear about the beginner who caught two or three salmon when more experienced anglers blanked. In this particular situation it is easy to see why.  Our beginner only owns a floating fly line and because he is new to the sport cannot cast very far, so it’s a case of the right man in the right place! . 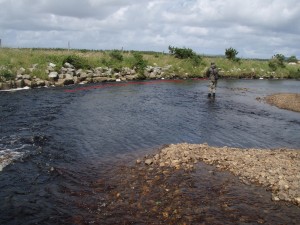 Here on the Glenamoy River we have the same scenario as depicted in diagram A1, and A2.-low water, with the fish lying in the main current in the outside bend.  This angler is fishing in the right place, but he is not being stealthy enough, and is showing himself to the fish.  He should be keeping back from the salmon lies, and possibly kneeling down to remain unseen. 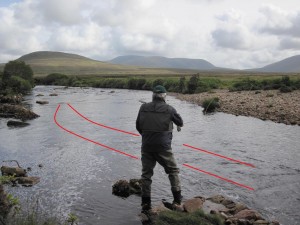 Here on the The Wall Pool on the Rockhouse Fishery river Owenduff our angler is concentrating on the strip of water between the red lines.  In higher water levels this potential taking strip will move to the inside bend to the right. 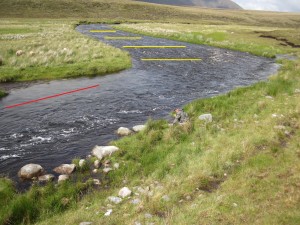 In this pool the angler is adopting the correct approach by staying low and remaining unseen.  The salmon will be lying in the easier flow between the red line and the edge of the white foam line, as the current directly under the angler’s bank is too strong at this water level.  Upstream we can see a stretch of very shallow, fast water (see yellow lines) these turbulent shallow stretches rarely provide good taking lies and are best avoided.

In the next articles we will look at various types of salmon lies, the holding depth of salmon in different types of pools, the importance of choosing the right depth of water in which to fly fish among others, and going over some of the topics in this article in more detail.  The skill of being able to spot potential salmon lies takes a little time to master, but even a little effort and thoughtful observation will pay handsome dividends.