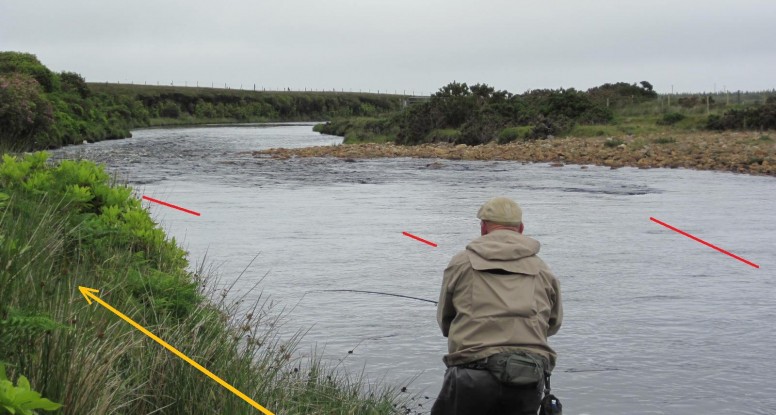 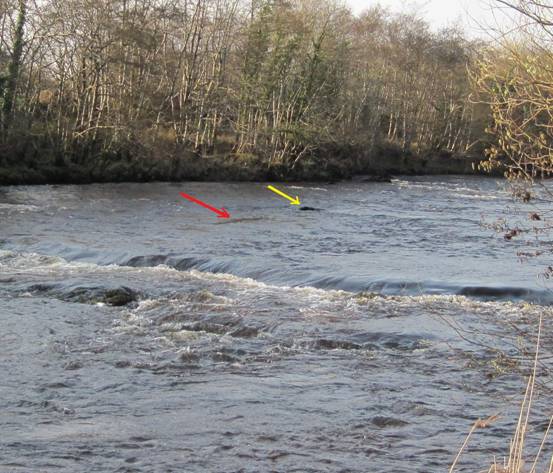 Salmon Lies: Part 4
The picture above is the same as the one we looked at in part 3 of this series. A rock (yellow arrow) causes a fairly evenly divided break in the current flow with an area of turbulence immediately behind it. When the braids of current rejoin there is an area of smooth evenly flowing current formed that creates and is a salmon lie (red arrow). In this case the current broke evenly and the salmon lie is created directly downstream from the rock. These breaks in the river current caused by rocks don’t normally break so evenly and there is usually only one braid of current created downstream of a rock that will possibly provide a moderate even flow of water.
This term moderate flow is difficult to describe, but if we wade out into some shallow streamy water and stand facing downstream with both legs close together we can then bend down placing our hand in the water to gauge the effect our submerged feet have on the current flow. If we place our hand in the water immediately downstream from our legs we should feel fairly slack/dead current and as we move our hand outwards to either side we will feel fast water. Somewhere between the two extremes we should be able to feel a moderate flow of current, and this will give us a basic understanding about the effect that rocks might have on current flow/speed. Salmon rely on obstructions such as rocks to provide this break in the current and insert themselves into the moderate flow which they prefer. 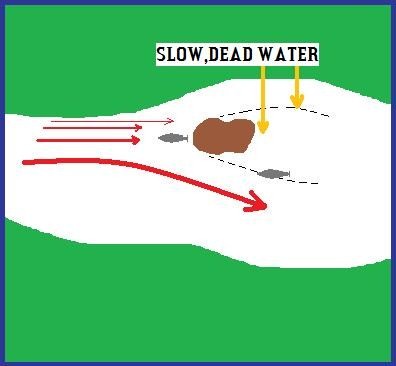 This diagram shows a large rock and its effect on current flow. The big curving red arrow shows the path of the main current in this pool and the other red arrows diminish in size indicating a gradual reduction in current flow across the pool. It is more than likely that a salmon will lie along the current break on the main current side of the rock as opposed to the slower flow on the other break line. The current flow that meets the rock head on is fairly moderate, and in situations like this salmon will sometimes lie in front of a rock. 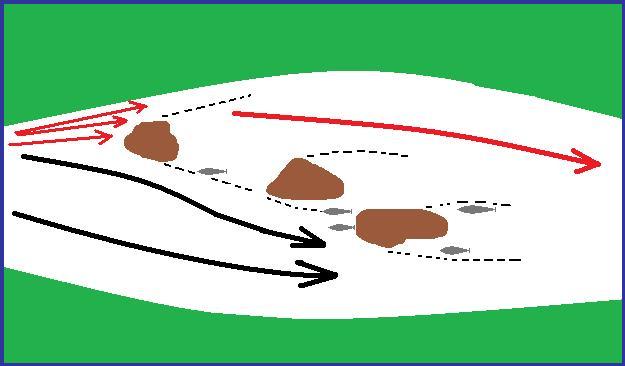 In this diagram a combination of rocks can create the right conditions for even more potential lies. Depending on the size of the rocks involved (especially a combination of large rocks) there is more of a chance that moderate flows will be created. The black arrows show the deep main current, with the three small red arrows indicating a weak secondary flow. The large red arrow indicates an area of weak current over water that is too shallow to provide ideal lies. These break lines (black dotted lines) can be either evenly flowing or swirling/turbulent/eddying. Salmon will not lie in swirling/turbulent/eddying water. 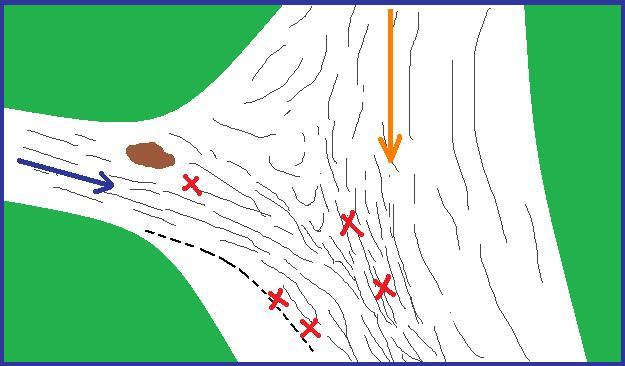 This diagram depicts a tributary stream where it enters the main river. The orange arrow shows the main river flow and the blue arrow shows the tributary stream. Where the two currents meet (two red Xs centre river) once again may provide moderate evenly flowing water and the fish can insert themselves along this break line, with the added bonus that all fish travelling up either river will pause at least momentarily so they can decide which one to ascend. The black dotted line is another break line along the inflow of the tributary stream, where slack water meets faster water, and the angler must be careful not to spook any fish lying here as they will often be quiet close to the river bank. The red x just downstream from the rock is another salmon lie along the break line created by the rock. 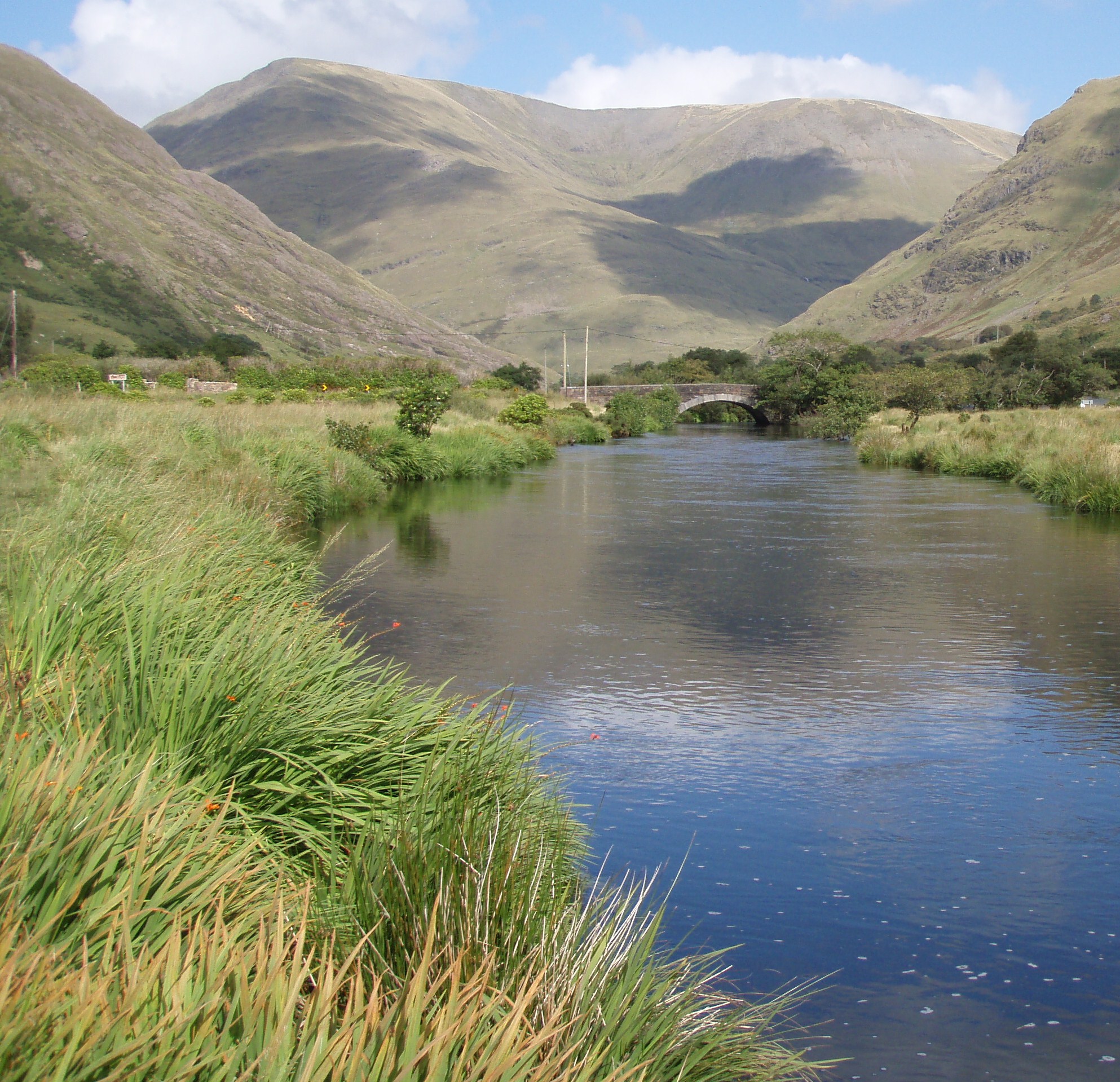 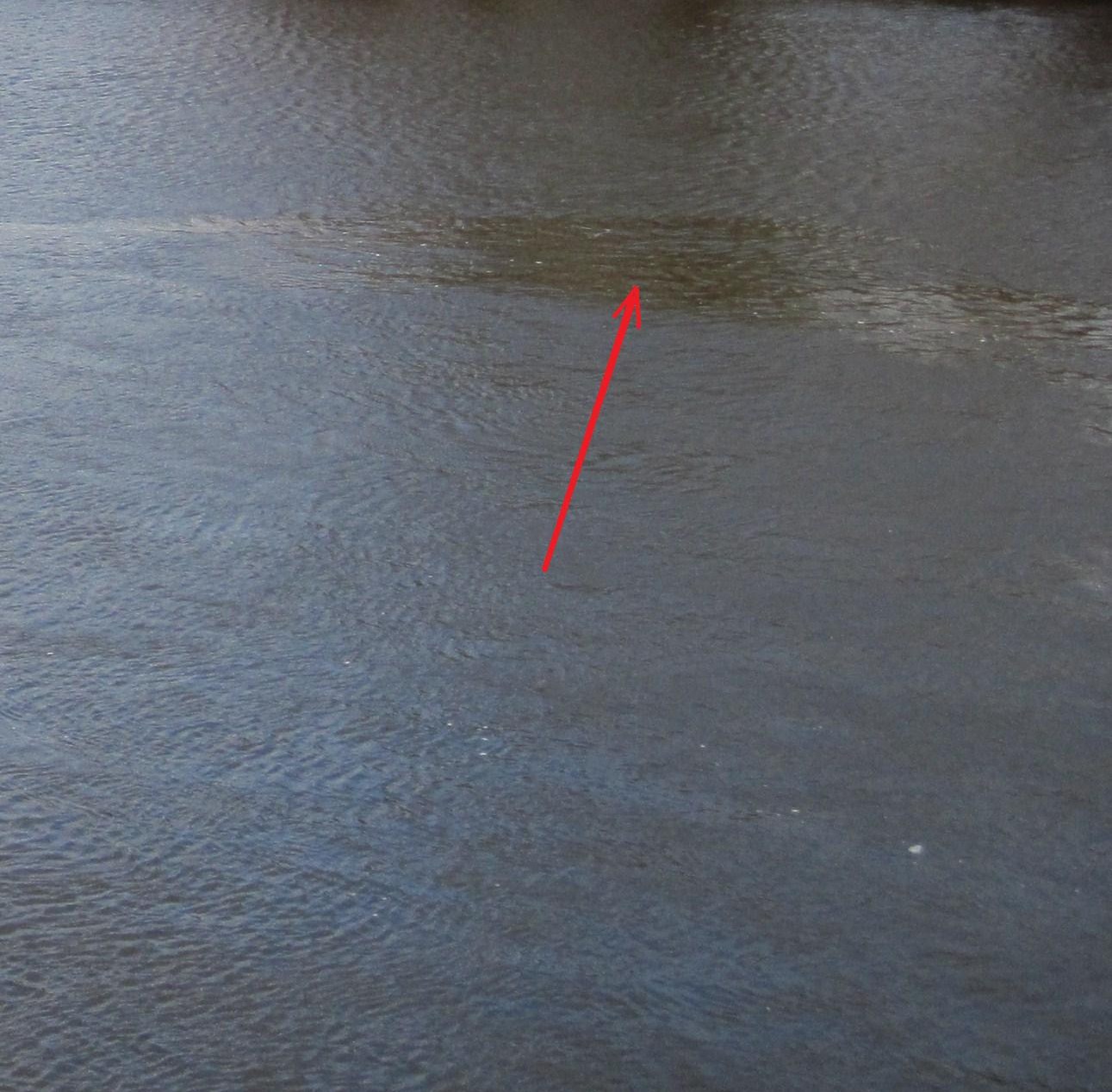 With a breeze to ruffle the surface of a normally flat surfaced pool, we now start to see some smooth areas among the ripple. These smooth areas are strips of evenly flowing current that the wind is unable to ruffle because the current is stronger there than the rest of the pool and usually pinpoints the main current seam through the pool. An upstream wind is best but as you can see in this photo even a downstream wind can work its magic also. This is a super tool for the angler trying to decipher featureless/slow current pools as the wind reveals not only where the main current is located , but it will also reveal the location of possible individual salmon lies just off the main current flow. 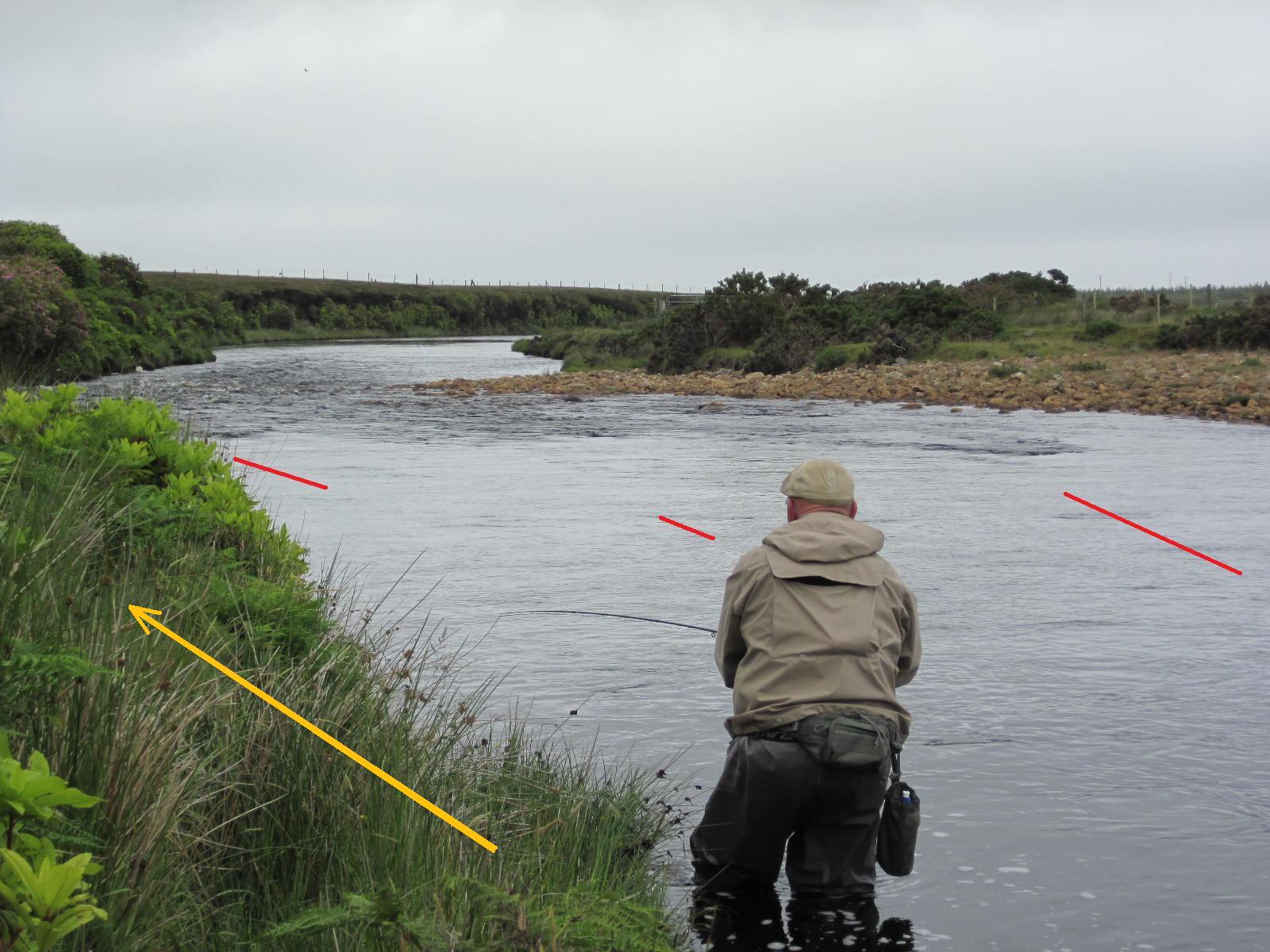 In this photo the red lines indicate where salmon may pause momentarily when entering this pool , with the red line on the left showing the location in low water flows and the other red lines showing the pausing positions progressing across the pool tail at medium and then high water levels. The most important thing about this photo is actually the positioning of the angler as he fishes down the pool. He could have easily worked down the pool from on top of the bank (yellow arrow) but he wisely decided on the stealthy option and waded quietly down along the edge. Being able to work out where salmon might be lying is a great weapon in our arsenal, but it is often so easy to spoil all the good detective work by showing ourselves to the fish.
All the best, Paddy